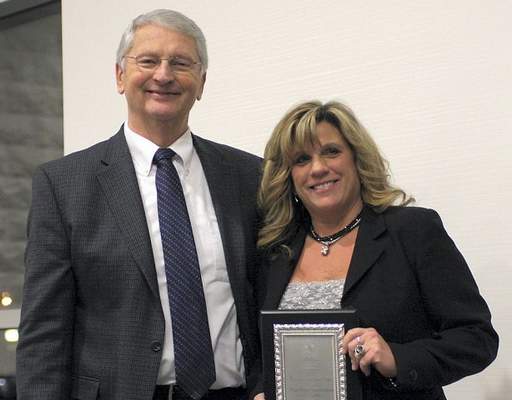 It’s a dirty job but someone’s gotta do it.

Papillion Sanitation, Ralston’s main waste and recycling service provider, has been doing it well in the city for nearly three decades.

And for a dirty job that’s often also a thankless ones, last week’s announcement the waste disposal company based in Papillion since the 1950s had garnered the 2012 Ralston Area Chamber of Commerce Business of the Year Award went a long way toward proving it’s not just someone who’s gotta do it.

“We’re extremely thrilled with the award,” said Lee Wilson, general manager at Papillion Sanitation. “It’s a privilege to be able to serve the residents of Ralston and a fairly significant portion of the business community there. We see the City of Ralston as a partner and we’re obviously very happy to continue to serve.”

Papillion Sanitation got its start out of the bed of Glen Gosch’s 1954 Chevrolet pickup truck and soon was the staple waste service in Sarpy County. The company moved into the wider metro area over time and into Ralston and its vicinity in the 1980s.

The company now employs 100 people and remains headquartered in Papillion.

The business, now a subsidiary of Waste Connections, the largest waste service provider in the state, has been a Chamber member for more than a decade.

“For us, it’s a very big deal,” said Jess Dopke, district sales manager, who accepted the award at the Chamber’s annual Awards Banquet last Thursday. “It’s important to us that we support the community we service and it’s greatly appreciated that they continue to trust us with their business.”

In addition to its contract as the waste removal provider for Ralston residents, Papillion Sanitation is also the waste and recycling service provider at the Ralston Arena, where the Chamber banquet was held this year.

“To be in that facility and be able to serve there is very nice,” Wilson said. “We look forward to a partnership with Ralston for years to come.”